When I was told that my Dad had Alzheimer’s my heart sank. I didn’t know a lot about it at the time, or the profound effect it was to have on my life.

I wanting to know how he had got it. Was I going to get it? The answer was that medics use Alzheimer’s as a headline when talking to the family of the patient. In fact, my Dad had vascular dementia. While my Dad had recovered physically from a heart attack, mentally the heart attack started a steady decline. So not hereditary directly, but a very good reason to reduce my risk of having a heart attack by staying fit and healthy, which also happen to be the same things recommended for reducing the risk of Alzheimer’s itself and a host of other diseases.

Over time, my Dad became more forgetful and got frustrated at his loss of mental sharpness. Crosswords and Countdown no longer appealed to him as they highlighted his loss. As the symptoms became more pronounced, I really struggled with how to react to mistakes these changes brought. Should I correct him or just let it pass? Everybody around him seemed to have a different take. Eventually, I came across an approach that helped me understand the disease and put the person and their wellbeing front and centre – it’s called the SPECAL Method.

Eventually, my Dad had to be cared for at home. What surprised me, when my Dad lost his ability to communicate verbally he could still play the piano well. It was obviously tiring for him but it gave him purpose and dignity to still be able to entertain, even if he couldn’t name the people around him all the time. As his symptoms worsened a small army of carers provided extra support for him and for my mum. This ranged from just spending time with him so that my mum could have a break or go to the shops, to eventually providing the full range of personal care. Continuity of care was really important, some carers he got on with and smiles were abundant, some, for whatever reason, he did not get on with. Working with the agency to ensure he got the carers he liked made all our lives easier. 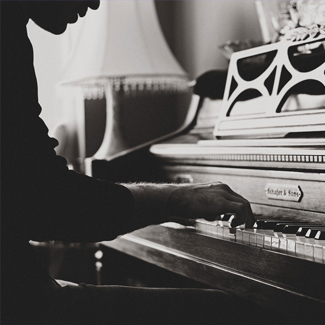 I live 200 miles away from my parents so I was keen to use technology to shorten the distance and help with the caring. Video calling worked for my mum (who is familiar with PCs) but my Dad was much less familiar with technology and he never really got it. I think my lesson from this is that if you want to use technology to help with care, largely stick with the technology you have. Introducing new stuff when mental capacity is impaired isn’t a recipe for success.  A large traditional landline phone with pictures of the people to press to call takes a lot of beating in the familiarity stakes.

Dad loved music, which was played for him on CDs. Diaries for events and medicines were also invaluable. Mum used paper for this, as it was more familiar – stick with what works. It didn’t matter that I couldn’t see the information as I knew the carers in their home could.

Trackers, whether by phone or by other devices such as indoor cameras and home monitors can be helpful if not essential but consent and privacy are real concerns. Also if an alarm is triggered, who will be able to respond locally if you are remote? What fall-back is there? Working this through with all involved will help avoid misunderstandings later if you are setting up a support network.

After his diagnosis, my Dad did have a good quality of life. He had good days where he was lucid, and others when it was a challenge but his character shone through. He always retained his love of music and chocolate and his eyes sparkled recognition even when he couldn’t find the words to say. I will always be grateful to the carers who made this possible.